Manifesto for Maternal Performance (Art) 2016! is a collaborative piece of writing and a performance between Emily Underwood-Lee and Lena Simic. The Manifesto pays tribute to Mierle Laderman Ukeles’ Manifesto for Maintenance Art 1969!. It follows Ukeles’ two-part structure: ‘Idea’ and ‘The Maintenance Art Exhibition: “Care”’ become ‘Ideas’ and ‘Maternal Performance Journal’. The Manifesto embraces the messiness and daily action of the maternal and strives to nurture an understanding of daily maternal practice. ‘Maternal time’ takes precedence over ‘maternal topics’: things to do with temporality and dead time, and wasted time, and interruptions, and illness, and duration, and endurance and the impossibility of doing it, ever finishing it completely. The desire for development and progress is rejected. The Manifesto was written in 40 days to mirror the 40-week gestation period during which a human mother carries her child. The Manifesto was born of practice, co-writing alongside mothering, the authors in relation to one another, separated over geographic and temporal space, but constantly in response to, and developed and supported by, the absent other.

Manifesto for Maternal Performance (Art) 2016! was first presented in Zagreb, Croatia for ‘Bringing Up the Future’ exhibition and conference at SC Gallery, University of Zagreb in February 2017, followed by ‘Oxytocin Festival’ at the Royal College of Art in London in June 2017 and ‘The Mothernists II: Who Cares for the 21st Century?’ symposium co-hosted by Astrid Noack’s Atelier and the Royal Danish Art Academy in Copenhagen in October 2017. 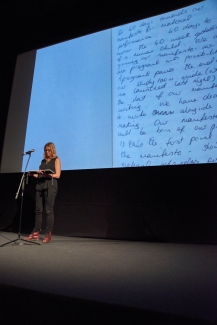